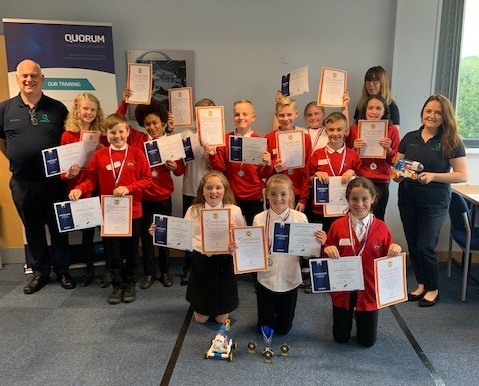 Quorum Invited 12 pupils from Aqueduct Primary School to take part in an Engineering Insight Day at Quorum’s office here In Telford. The aim of the day was to offer a practical insight into a career in Engineering and to inspire the next future generation of engineers while promoting the benefits of STEM activities.

The pupils had the opportunity to manage their very own project team, delegating tasks and working as a team to build and test an Air Powered Engine Car. Later in the day each team had the chance to put their car through some speed trials and practice heats where their fault finding skills were challenged before competing in the 2019 Air Powered Race Car Championships.

Each pupil was awarded a Quorum Certificate of Achievement, Engineering Insight Day Medal and the overall race winners ‘Team Beast’ were presented with individual trophy’s and a School cup. The day was a big success and all the pupils left with smiles on their faces. Many commented on how they had been inspired by the activities and how they were better informed about Engineering.

An excellent day and a big well-done to the Quorum team!

”I start by saying what a wonderful day the children had. It was extremely obvious to observe the time and effort that had gone into making the day not only enjoyable but also packed with learning. The children really did gain so much throughout the day, learning, maths, science and technology skills that went on to produce an end result. The planned timetable of activities promoted STEM superbly, as the skills they were involved with led to a result, whilst encouraging the pupils to consistently think as an engineer.”- Jo Clarke Deputy Head   Aqueduct Primary School.